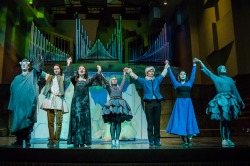 Two singing codfish, a witch, a prince in disguise, the sun, the wind, and a fisherman.

Every spring since 2003, the School of Music’s professional development and outreach-based performance program has toured elementary schools across the province. Today on the St. John’s campus, the roadshow is putting off a special matinee for a packed house of children and their families.

Once the show is over and the performers take their final bow, there’s a chance for the audience members to get their photos taken with the performers and to even enjoy afternoon tea.

“We loved it,” said Dr. Jillian Gould, a mother of two young children and a faculty member in Memorial’s Department of Sociology. “It was wonderful to see live opera. I think we were very lucky.”

While Dr. Gould looks on, her five-year-old daughter, Sally, wraps herself in an orange boa and poses for pictures with cast members.

“It was fun to see the second time,” said Ms. Gould, who previously took in the show with friends at Memorial’s Childcare Centre.

Port-au-Port fable Le Nez de la Sorcière is an opera inspired by a Newfoundland fable that originated from the Port-au-Port Peninsula on the island’s west coast.

Written by Newfoundland composer, Dean Burry, from Gander and Acadian playwright, Mélanie Léger, it was commissioned for the Opera RoadShow in 2011 and remounted for touring this year in celebration of Canada’s 150th birthday.

“We’ve introduced thousands of children to this powerful and vibrant way of using their voices and provided School of Music students with valuable professional experience,” said Dr. Schiller, who teaches voice, directs the school’s opera program, and founded the Opera RoadShow as a touring opera ensemble for children.

“Our goal is to make live theatrical performance available to every child in this province.”

“This is valuable experience for me because we get to sing every single day, which forces me to improve and be on top of my game,” said bass Alex Halliday, a fourth-year voice performance major from Nova Scotia who plays the role of a fishermen and causes some trouble for his village when he makes fun of the witch’s nose.

“I’ve been part of the Opera RoadShow for the past three years. The audiences are always different, so you have to constantly adapt and find ways to connect with the children.”

“There’s a view that opera is pretentious, so we are trying to remove some of the stigma,” said tenor Jacob Lawrence, a fourth-year voice performance major from St. John, N.B., and the prince-in-disguise in Le Nez de la Sorcière.

Mr. Lawrence will continue his opera studies this fall at the University of British Columbia, working towards a master of music in voice performance. Mr. Halliday will attend the University of Toronto’s opera school.

When Dr. Schiller created the Opera RoadShow back in 2003, it was a challenge to get schools interested in opera performances. That has changed. “Now schools know it’s going to be something that will engage the children.”