New graduate has instrumental experience at Memorial's School of Music 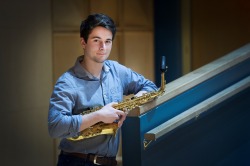 New graduate has instrumental experience at Memorial's School of Music

Studying at Memorial's School of Music has opened a lot of doors for new graduate Mitchel Fleming, including acceptance to law schools in every part of the country.

Ultimately, the Nova Scotia native chose McGill University in Montreal, Que. The city has a vibrant jazz scene and it's the hometown of Oliver Jones, Oscar Peterson and the Montreal Jazz Festival.

"As long as I'm living in Montreal, I'll have the opportunity to continue my passion for music," said Mr. Fleming, who majored in saxophone, played in the school's big band and jazz ensembles, and intends to become a musician who also practises law. He will pick up his bachelor of music degree during convocation ceremonies on June 2.

The allure of a rich musical culture in St. John's was also a big draw when Mr. Fleming was deciding on where to do his undergraduate degree — that and a family connection to the province. (His dad is from Stephenville.)

"I've been a fiddler since I was seven years old," said Mr. Fleming.

"My mom is from Cape Breton and introduced me early to the violin. The Irish/Scottish tradition is prevalent in my family."

In Grade 6, Mr. Fleming picked up the saxophone and continued playing throughout high school.

When it came time to choose an instrument for music school, he chose music and saxophone studies, and was introduced early on to more jazz and contemporary music through instructors like Dwayne Andrews and Bill Brennan.

"Each professor has a stake in their students." — Mitchel Fleming

"They broadened my scope of music and gave me the opportunity to play at a high-calibre level," he said.

"And having an intimate faculty setting here was really instrumental — pun intended — in developing my musicality. Each professor has a stake in their students. They know your name and they are much more likely to meet with you after class. They are much more willing to come to your 10 p.m. dress rehearsal."

Memorial also gave Mr. Fleming a chance to flex his volunteer and leadership skills. In 2015 he set out to create the school's first scholarship for Aboriginal students.

"I had done some volunteer work for the Native Friendship Centre in St. John's, and worked for the RCMP and the Qalipu Mi'kmaq First Nation two summers ago, so I wanted to combine my interest in Aboriginal issues, and music."

"I think that Aboriginal students have a unique perspective to offer the School of Music and Memorial." — Mitchel Fleming

Working with Sean Panting, the School of Music's development officer, Mr. Fleming used every spare moment he had to seek donations for an endowed scholarship.

The inaugural Memorial Aboriginal Music Award was presented this past year to Kendra Jacques, a violinist from Labrador.

"I think that Aboriginal students have a unique perspective to offer the School of Music and Memorial."