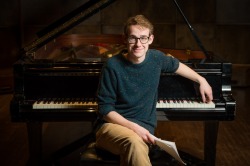 An essay written by Evan Slaney, an undergraduate student in the Bachelor of Music program, has been accepted for publication in Nota Bene: Canadian Undergraduate Journal of Musicology. Evan’s essay, “Socratic Dialogue as a Framework for Understanding Activist Music during the Ebola Outbreak in Liberia,” will appear in the 2016 issue of the journal. Essay submissions were solicited from undergraduates last autumn for possible inclusion in the journal. The editors received a record number of submissions from North America, Europe, Asia, Africa, and Australia. Evan’s essay was praised for its originality and thought-provoking content.