We have created an introduction to some of the most popular services provided by our Religious Studies Department, the Memorial University of Newfoundland, and the City of St. John's. Some of these services support academic life, but many of them support the rest of one's life, through activities like sports, the arts, or social relaxation.

The Department of Religious Studies promotes not only study and research but also a friendly, social atmosphere. The department secretary, Annette Sullivan, coordinates many of the department's activities from her office on the fifth floor, and everyone benefits from her expertise, efficiency and helpfulness. The department has an active undergraduate society, which brings students together with each other, and with faculty, outside of class. Many of the upper-level courses are small-group seminars, which give students an opportunity to share ideas with each other as they specialize in topics that interest them. Fourth-year Honours students may apply to the neighboring QEII Library for a private study carrel as they write their honours essay.

Each year's Graduate Class is small, and this gives those students the opportunity to get to know one another well. The graduate students have use of a small, dedicated library, which is located on the same floor as the rest of the department's offices. Here they meet with one another to socialize, discuss classwork, write and research. It is equipped with networked computers, a scanner, a printer and the students' personal mailboxes. Some students also maintain a graduate study carrel in the QEII Library next door. 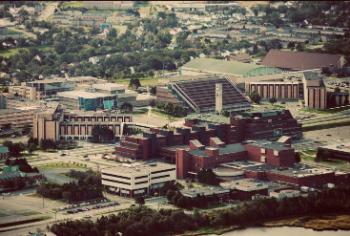 Memorial University of Newfoundland is a large research and teaching institution with over 17,000 students and almost 1,000 faculty. The MUN Libraries hold an impressive 1.3 million print volumes and a large, growing collection of electronic journals. The librarians are professional and helpful, and they will go anywhere necessary to retrieve a source through their document delivery programme.

MUN has all of the services, clubs and societies that one would expect at a large Canadian university. It also offers some more exceptional services, such as the Faculty of Arts' Writing Centre. This free, drop-in service helps students with aspects of their writing such as grammar and organization. Graduate students may request a special graduate tutor for advice concerning their thesis proposals, theses and letters of application.

There are two bars on MUN's St. John's campus: the Breezeway and Bitters. Operated by the Students' Union, the Breezeway is a very large bar that has lots of activity and notoriously low prices. Bitters is a smaller, quieter pub run by the Graduate Students' Union. It offers a wider selection of beer, especially on tap, and a full menu. Its clientele is more typically composed of graduate students, faculty and staff, but anyone is welcome. 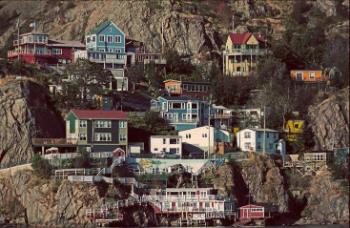 Approximately 175,000 people live in the metropolitan area. The city boasts 500 years of history, colourful Victorian architecture, a large network of scenic trails and public parks, an active arts community and a vibrant nightlife.

For 250 years possession of St. John's swung back and forth in battles between the Basques, the Dutch, the French and the English. It was the English who came to hold the city after 1762, and the arrival of a great number of Irish immigrants in the nineteenth century has created a strong Anglo-Irish influence in the culture. This influence is still very evident in the local dialect, which is unlike anywhere else in Canada. It was not until 1949 that Newfoundland opted to join Canada, and much about the local culture remains distinct.

A defining year in the city's architectural history is 1892, the year of the last Great Fire, after which nearly the entire city had to be rebuilt. Tragic as it was, this event has left the city with a very consistent architectural legacy, in which much of the downtown is late-Victorian. People here favour deep, bright colours when painting their homes and businesses, and this creates a lively and unique atmosphere on the winding, narrow streets. Many stone and brick buildings pre-date 1892, and the city is full of historic buildings. 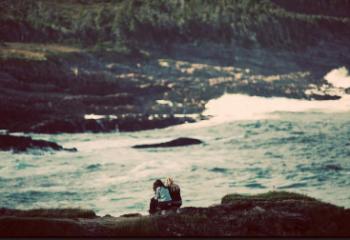 St. John's sits on the East Coast Trail, 400 kilometres of hiking trail that runs along the coast of the Avalon Peninsula. It runs through ghost-towns, historic sites, ecological reserves, past lighthouses and an archaelogical dig. The views of cliffs and ocean from the trail are spectacular, especially during ice-berg season. Back in St. John's, 100 kilometres of walking trails are maintained in the metropolitan area, as gravel, pavement and boardwalk. Perfect for running as well as walking, they weave around lakes, ponds and rivers, though parks, woodland areas, historic sites and the waterfront.

One of the landmarks on the city's trails is Quidi Vidi Lake, where the Royal St. John's Regatta has run every August since 1825. The Regatta is an important community event in St. John's and is North America's oldest continuous sporting event. Public spaces are scattered around the city, and one of the largest is the 50-acre Bowring Park. Opened in 1914, it is an elaborate and romantic garden, landscaped with rare trees and flora, streams, duckponds, statues, monuments and walking paths. 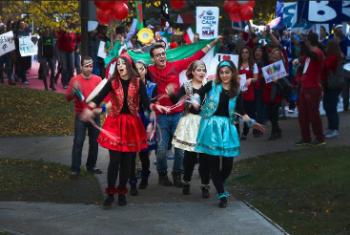 Artistic groups in the city present theatre, dance and music, as well as large-scale events like the Shakespeare by the Sea Festival and the Newfoundland Folk Festival. The Resource Centre for the Arts operates a theatre in the downtown area where both established and new works are presented, and where visual artists show their work. There are also other public and private galleries and museums and city-sponsored street art throughout the downtown.

The MUN School of Music presents a program called "Music at Memorial" throughout the academic year. This program brings to the campus classical music performed by top-notch soloists, chamber musicians, choirs and the Newfoundland Symphony Orchestra. The Arts and Culture Centre provides a venue for many large events, such as musicals, while the very largest acts, such as rock concerts, play at the Mile One Stadium in the downtown.

George Street, in downtown St. John's, is the centre of the city's nightlife because of the impressive concentration of bars running for blocks on both sides of the street. These establishments cater to all kinds of tastes, from quiet pubs designed for laid-back chatting, to live DJ dance clubs. It is here that thousands of people attend the annual George Street Festival, which features five nights of live outdoor music. Restaurants and bars are spread throughout the downtown. Specialties include fresh seafood and live music, and 'happy hours' are not only common, but also commonly several hours in length. For bars, weekend closing times range from 3am to 5am, depending upon the venue.