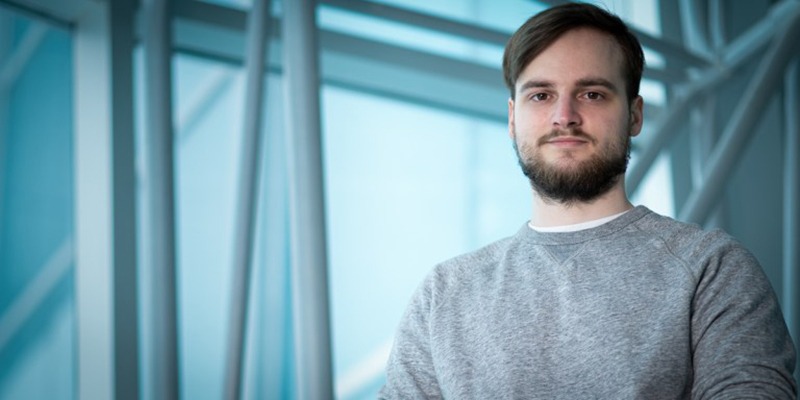 Not all students have the same level of support, be it financial or otherwise.

Zackary Grohman has overcome a lot of hardship in his young life. But he didn’t do it alone.

His intelligence and work ethic hasn’t gone unnoticed by the people in his life who lent him a hand on his journey to higher education and a better future.

Mr. Grohman did not have an easy childhood. His parents separated and had some issues to deal with. As a result, their son’s education was not a priority.

“In my senior year, I missed something like 60 full days,” Mr. Grohman said. “But I was still getting good grades.”

His teachers at Gonzaga High School in St. John’s noticed both his intellect and his attendance issues.

Two teachers, in particular, talked him out of making a bad decision: dropping out of school.

“I had teachers who knew that there was maybe something going on at home. Jamie Vaters taught me chemistry. He gave me AP material to study on my own. Amanda Craig taught me physics. She was the first person to ask, ‘Are you ok?’ I spent a lot of time talking in her classroom after school. I’m really lucky I had these two fantastic teachers.”

“I had parents who were heavily involved in anything that was going on in our community. I saw how they helped others,” he said. “Zackary had nobody supporting him. He’s very smart and I try to mentor him and help however I can, whether it’s emotionally or financially.”

With the support of his teachers and Mr. Facey, Mr. Grohman enrolled at Memorial University to pursue an engineering degree. However, it wasn’t the right fit.

This time around, he did drop out. Instead of school, he worked at a construction company owned by his cousin, John Madden – a man Mr. Grohman says is a second father to him. It was there that he found his new calling.

“I was invoicing clients, writing quotes and setting up templates to make paperwork easier. I got interested in the business side of things. I had an actual, important task and it felt really fulfilling.”

Mr. Grohman decided to return to Memorial, this time enrolling in the Faculty of Business Administration. He plans on becoming a chartered professional accountant once he completes his degree.

Finding the right degree program, however, does not mean that things are easy. He’s lived alone and paid his own rent and bills since he was 17. Money was already tight – then, the pandemic hit.

“Loans don’t take into account the cost of textbooks, which in some semesters is hundreds of dollars,” he said.

“And sometimes it’s hard to get by on two packages of ramen a day. I have to make sure that I have enough work during the two weeks between semesters, or I won’t be able to eat.”

Supporting the next generation

The good news is that Mr. Grohman is the newest recipient of a CIBC Undergraduate Bursary in Business Administration.

The program offers bursaries to full-time undergraduate students in either their first or second year of studies. Mr. Grohman’s bursary is valued at $3,480.

“Enabling access to education is part of our commitment to helping students realize their ambitions. We look forward to celebrating their many achievements.”

A circle of giving

Mr. Facey suspects Mr. Grohman’s bursary will lead to a circle of giving.

A staunch supporter of education and philanthropy himself, Mr. Facey has helped several students with the application process for a scholarship or bursary. He has also helped clients with estate planning and is sure to mention student financial support as a noble area for investment.

Everybody has a story

Receiving the bursary has made a significant difference to Mr. Grohman’s life. He hopes that others will be encouraged to give their support to students like him.

“Everybody has a story,” said Mr. Grohman. “People talk about someone who has had an impact on their life. You could become that person to someone through giving. I plan on doing that, if I ever get the opportunity. It can literally be life-changing – and it was for me.”

Please donate today, if you can, and support students like Zackary who need a helping hand right now. Thank you for your kind and generous support!